We arrived in the Ashram from the city on Saturday for weekend service. By the
time we arrived (late as usual) the groups had been divided and work had started.
No one seemed to need a extra hand so we decided to help in the kitchen. For a
long time we had been wanting to have a jackfruit curry but as Anant was on
leave it was too much work for Nanda. So now we decided to cut jackfruit for
dinner. I assumed, to my advantage, that serving dinner to devotees would also
come under Seva activities.

Well, we got Hari up the tree and got three big jackfruits down. We hunted the
kitchen for the biggest and strongest knives and started the cutting process. But
to our surprise we found that none of the ‘strongest‘ knives had a sharp edge. As
myself and Tutun struggled with the uncooperative jackfruit, the men nearby,
cleaning the kitchen floor, came in to lend a stronger hand. Now we were 5
people cutting the jackfruit. Two of us holding the table steady so that it would
not topple, two of us holding the jackfruit straight and one doing the actual
cutting. Without a sharp knife it was hard work but we did not seem to mind as
we joked and laughed our way through the job at hand.

That night, as I reflected on the day’s work, I realized that the jackfruit cutting
was so symbolic of that day’s activities. Last week one of the devotees had taken
strong exception to the attitude of another devotee who was obviously at fault.
But after having a heart to heart discussion with her that evening, she came to
me smiling, her previous anger gone, and she remarked that none of us were
perfect and we should not expect perfect behavior from others. She was learning
to be tolerant of people and their mistakes.

In another incident, a devotee had a very strong opinion about how to track
kitchen expenses. But her idea was not accepted. She fought hard about it for a
good half an hour. In the end, she let go without any disharmony. She was
learning to let go of her stand in the interest of group harmony.

Previous night I had worked late into night and had slept very late. I was woken at
5 am by my mobile ringing as Tutun was calling to share a wonderful dream. The
very next night I had a nightmare and I woke her up at 4 a.m. Tutun had a very
tiring day and had been wanting to sleep late. We both were learning to
accommodate each other’s needs over our own.

Lying there in the bed that night, I realized that we all were like the blunt knives
with which we had been trying to cut the jackfruit. We had our own areas that
needed to be worked upon, we knew nothing about running a Ashram and above
all we were learning beautifully to work as a harmonious group. We were Masters
blunt knives, but I know he shall use us successfully to accomplish the task at
hand. He was teaching us the basic rules of living in a community. 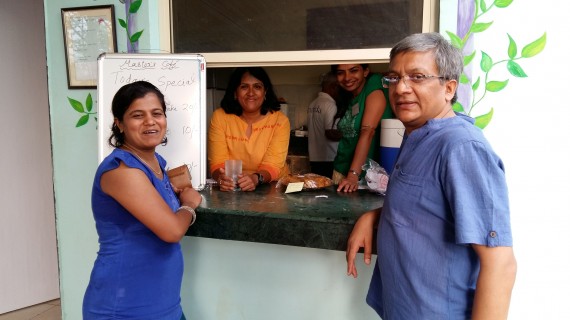